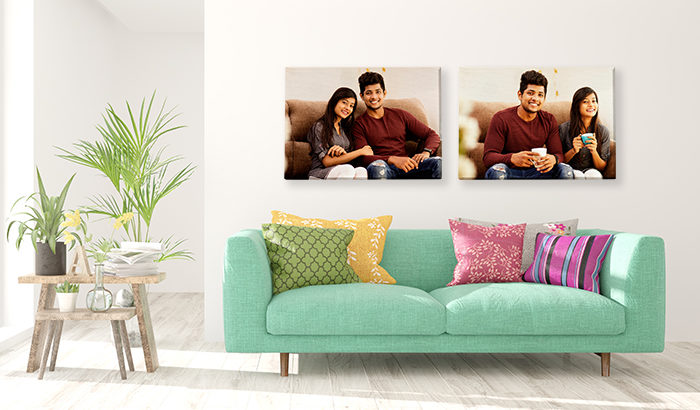 Back in the day people never really put much thought into canvas, they were, therefore, printed with messages, to pass on information in schools or used by companies as a means of communication. They were printed with the rules of the company and some were used to appreciate people who had made a difference in an institution, either a school or a hospital.

With time, however, canvas became more relevant because of its characteristics and usability. Canvas can be adopted in many different applications and due to its durable nature; people use it to preserve their memories. Institutions such as museums and art galleries are also on the fast track in adopting canvas for use in preserving delicate photographs that could easily disintegrate because of frequent use.

The above notwithstanding, people have also decided to go all out and use canvas prints on a personal level. And this they do by printing special personalised canvas messages when celebrating special occasions, for example, you will find individuals having a whole lyrics of a song printed on canvas to give to their special someone, and this can later be put up on a wall and is constantly used as a reminder of the love that one has for the other.

Some people also print names of their family members on canvas complete with their meaning, this can then be given as a gift to parents or the grandparents and consequently be used as home décor but now with meaning. The birth of a child is significant to every family and we always find ways of making this day memorable but have you ever thought of having a nice personalized canvas message printed on canvas complete with the picture of the baby.

Well, this is one way of preserving the memory of the specific day especially if the canvas print is presented to the mother of the child. Some people also make canvas prints of their favorite pets, accompanied by their names on the bottom; this could be a good memory to hold on to especially since pets don’t last too long.

Other canvas prints are personalized with quotes either from the Holy Bible or the Holy Quran; such kinds of prints are mostly sold, to centers of worship. And those that have been printed with prayers are given to schools to help children learn the common prayer used in the school. Some canvas prints also contain a countries National Anthem complete with the flag, many patriots will have such hanging in their living rooms.

Some schools also prefer to use canvas prints in their school laboratories, the simple reason being that these images will not fade nor come out and will also help students relate to the activities of the room. Poets and writers have also been met with the canvas craze and are putting down special personalized canvas messages on canvas for sale.

The above is later used for interior decoration because of the messages that they contain and can be used in training halls for inspiration, or used in hotels as part of interior decoration. Do you have a message for the world or one person just have it printed out on canvas and it will quickly turn into an heirloom.